I’ve been beta testing 1Password 4 for the last month or so, & so far I really like what I see. One of the neatest new features is Multiple Vaults, which the company describes this way:

1Password 4 helps you keep your data more organised than ever before with the new multiple vaults feature. Want to keep your work and personal stuff separate? No problem, just create a separate “Work” vault. Have to handle your parents’ finances but want to keep that separate from your own stuff? No problem, create a separate “Parents” vault. Have items that you don’t want to delete but that aren’t really relevant anymore? No problem, create an “Archive” vault. Each vault can have its own password, its own identifying icon and accent colour, and its own sync settings.

And here’s a picture, courtesy of Agile Bits, makers of 1Password: 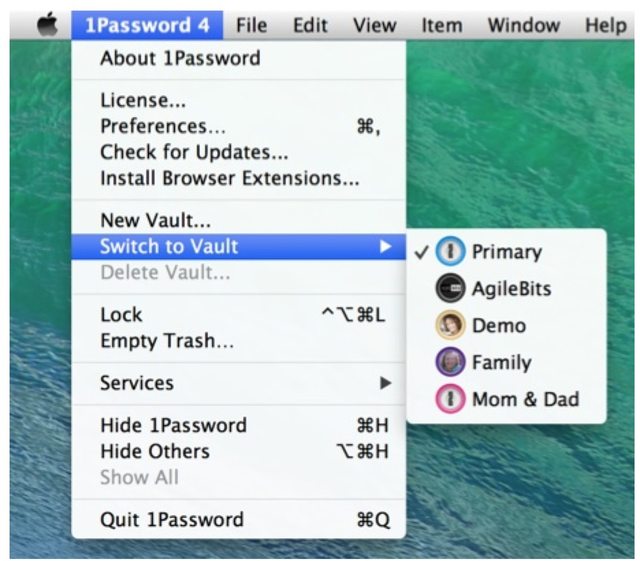 This sounds like a great new feature. LastPass has had something similar for a while called Shared Folders:

A ‘Shared Folder’ is a special folder in your vault that you can use to securely and easily share sites and notes with other people in your Enterprise account. Changes to the Shared Folder are synchronized automatically to everyone with whom the folder has been shared. Different access controls—such as ‘Hide Passwords’—can be set on a person-by-person basis. Shared Folders use the same technology to encrypt and decrypt data that a regular LastPass account uses, but are designed to accommodate multiple users for the same folder.

This is a really cool feature, & I have friends who use Last Pass as part of a team & say it’s really nice, but it’s not enough to overcome the horrible, confusing UI that LastPass possesses.

At WebSanity, we all use 1Password. When I read about Multiple Vaults in 1Password, I immediately thought that it would be perfect for us. However, there’s one problem, as an AgileBits (makers of 1Password) employee explained:

If we can’t use it on our iPads & iPhones, then we can’t use it. Once 1Password allows us to use multiple vaults on our Macs & iOS devices, we’ll happily start using them. But until then, we’ll just have to wait.

You’re invited to a talk this Wednesday, September 11
Why I support Obamacare